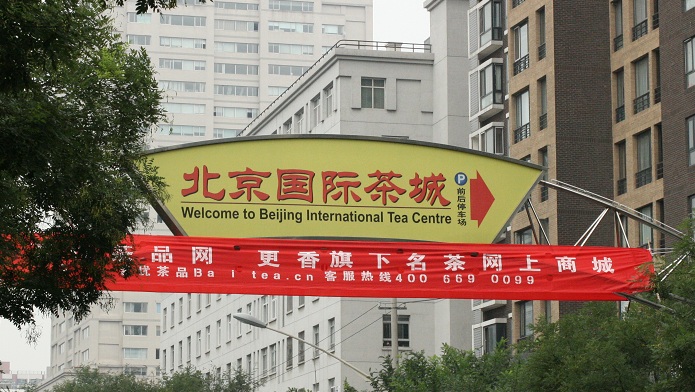 Imagine this - a bustling city street (quite long) filled with shop after shop of TEA!  That's "Tea Street" in Beijing and I could have spent a week just browsing each and every shop in great detail.

When you enter a shop, you'll receive an initial welcome, complete with mild surprise that a Westerner has found her way there.  Shops vary, some have an English-speaking staff member and others don't.  It didn't matter much, as the gesture to sit and taste tea is universal. 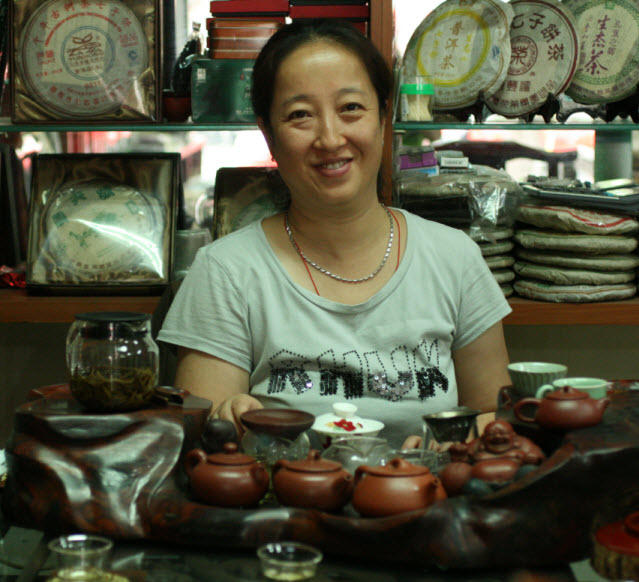 This gracious tea shop owner served us a white tea.  Look at her gorgeous tea table!

I don't think anyone came home empty handed from this excursion.  In fact, most of us could have spent all of our discretionary funds in one place!  Good thing we had limited time.  I came home with some treasures to be unveiled later, along with some tea from this shop (below).  I will confess, the name is what pulled me in! 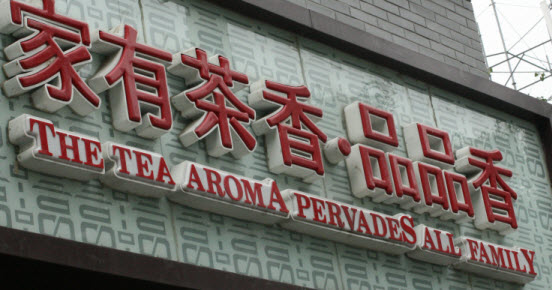 
According to Mr. Wu, our National Guide, this company is well-known across China, with a good reputation. I was after a dark Wuyi oolong-style tea, and getting that communicated was quite a fun experience.  Many thanks to my fellow tea mate who had been studying Chinese.  Between her language skills and lots of trial and error, we found a nice Da Hong Pao and I came home with a bag full.

Side note:  One of the things I learned on this trip is that Da Hong Pao, "Big Red Robe," technically refers to tea trees that are very old and very protected.  Even the lucky among us won't likely sample that nectar.  What we drink today (hopefully) when we have Da Hong Pao is tea made from tea plants that are derivatives of the original, several generations down the line.  It's more appropriately called "Small Red Robe."  Thanks to Dan for the lesson.  More info. 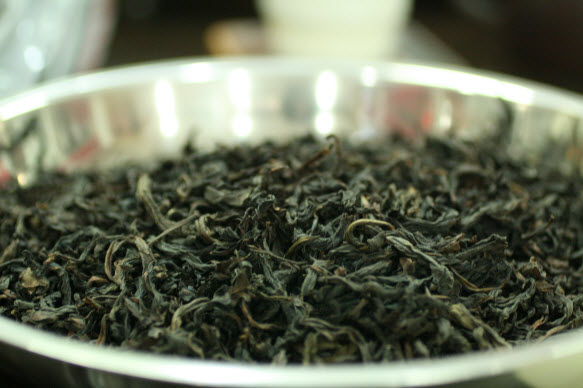 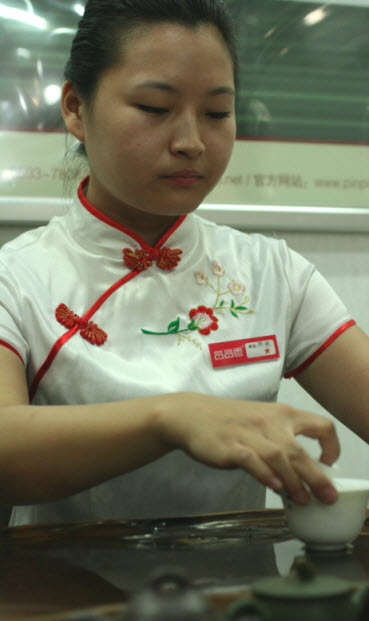 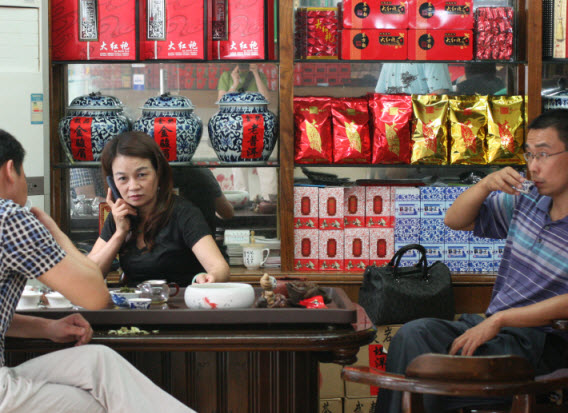 Noon update:  Oh, blogger - you are such a tease!  I LOVED the  new dynamic layouts, but I'm back to my old ways (with a wider template) because the COMMENTs didn't work.  What blogger wants to live without comments?  I hope I'm just missing something.

I'm trying Blogger's new "Dynamic" layout.  It does several things for me, the most important:  It allows me to use larger photos without much fuss.  Yay!  It also gives YOU more control.  Play around with the options shown below to see which you like best (Classic, Flipcard, Magazine, etc.) 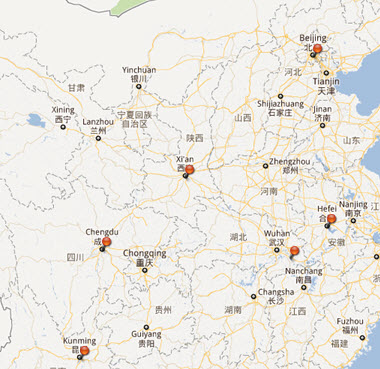 Approximate locations of destinations in China
For today's post, I thought I'd provide a big-picture perspective of this tea tour.  I liken this experience to a master's class in tea, a month-long intensive.  The best part is that at the end I have memories and photos and treasures instead of an exam.  ;-)

This China Tea Tour is organized by Dan Robertson of World Tea Tours.  Mr. Wu, our Chinese National Guide, was also indispensable to our success. Approximate locations of destinations in Tibet and India
I participated in all three components of the tour:  Beijing Pre-tour, China Tour (including Tibet*) and Darjeeling, India Post-Tour.   The tour offers both breadth and depth of tea and cultural experience.  We saw (and drank and picked) many differing types of tea, and we learned in detail about several.

Some highlights of the trip include:

* As it stands today, Tibet is part of the country of China.  I don't pretend to grasp the subtleties in the conflict surrounding, as the Tibetans would say, the Chinese occupation.  For the purpose of this blog, I will refer to Tibet as an independent entity.  My experience is that the culture, terrain and people in Tibet are unique.
Posted by Steph at 2:59 PM 5 comments:

The Hand that Picks 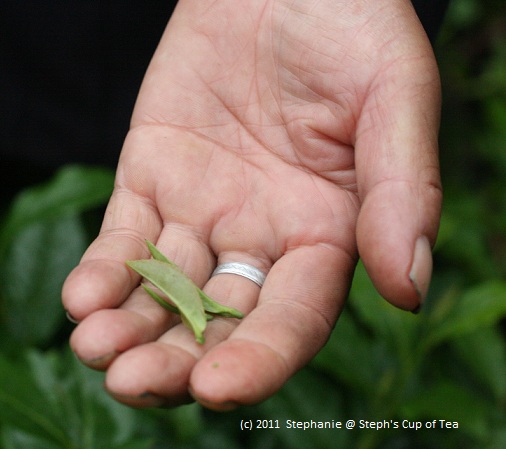 Woman's Hand, showing me the tea she's just picked
Huo Shan Village, Yellow Tea
Dear blog friends,
Wow - this re-entry thing is taking longer than I had anticipated.  ﻿I'm finally rested and sorting through all kinds of things: laundry, treasures, gifts, memories, happiness to be home, sadness that the trip is over.  And on top of that I'm integrating into my daily life, not-so-eagerly anticipating the return to work, sharing concerns of family and friends, etc.
I don't know where to start or how to piece this trip out, and I'm not one usually prone to writer's block.  So I will begin with what is most vivid in my mind, and that is the lives of the people who work the tea fields.  The photo above is among my favorites.  Notice the dirt under her fingernail, the pretty silver band she wears, the lines in her hand, the vibrancy of the green leaf.  It's all there - the hard work, the beauty in it, the struggle, the love, the tea that sustains this community.  It was a privilege to be taken to these fields and see, for a brief moment, how these people connect with me.  They pick the teas that I drink.  That I will never, ever forget.
﻿
Posted by Steph at 12:50 PM 10 comments:

Hello!  Well, after a 24-hour delay and about 24 hours of jet lag fuzziness, I'm finally home and among the awake.  I hope to reconvene the stories tomorrow,  tho I'm not quite sure where to begin.  Cheers!
Posted by Steph at 3:47 PM 5 comments: 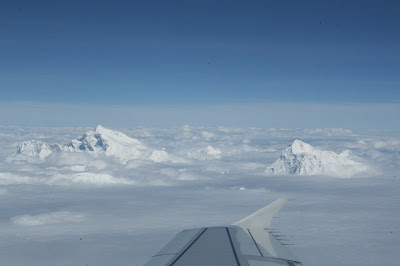 Here's a photo taken from the plane today as we flew from Tibet to Katmandu, Nepal.  Mt. Everest was on our right, and I thought the plane would tip because everyone wanted a look!  The large peak on the left is Mt. Everest, tho there are lovely Himilayan Mountain chains all around.  This is just one of hundreds of breath-taking views. 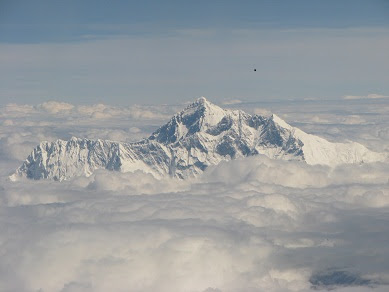 
We'll be landing in Delhi, India tonight and make our way to Darjeeling tomorrow.
I have so much to share with you about this trip (like climbing the steps to the Potala Palace and having yak butter tea in a Tibetan nomad's tent yesterday - real people in the remote Tibetan grasslands, anything but a tourist attraction)...but I will share much of that when I get home.  I'm focused on absorbing all that I can and sleeping when we have a few hours.  If the internet is decent in India (no idea what it will be like), I hope to get in at least one more post.
Namaste, Stephanie
Posted by Steph at 4:59 AM 9 comments: 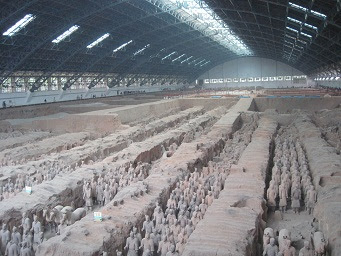 We visited the infamous Terracotta Warriors recently, a UNESCO World Heritage Site and dubbed the Eighth Wonder of the World.  The scale is awe-inspiring.  A farmer found them while digging for a well in his field one day in 1974.  Wow. 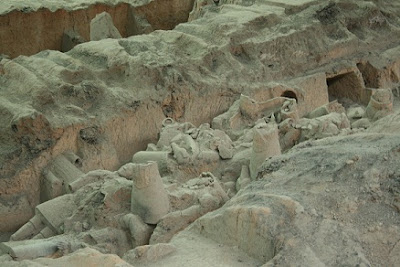 The statues start out like this - in pieces and shards.  Archeologists and restorers spend countless hours working what may be the world's largest jigsaw puzzle. 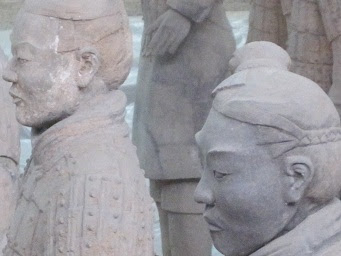 I found myself studying the details of their clothing, hair, and facial expressions.  The variety seems limited and the rumor is that they're modeled after real people.

The Terracotta Warriors are funery art in the burial tomb for emperor Qin Shi Huang, the man that (forcefully) unified China and therefore the first emperor of a unified state.  (I have to say it - what an ego!)

The life-sized warriors were orignally painted, as well, but over 2,000 years in "storage" and exposure to the air upon excavation deteriorated the color.
When in China, this is a must-do if you are anywhere near Xi'An.  Note that it is extremely popular and therefore crowded, but worth it.  Also visit the teahouse.
Posted by Steph at 3:14 AM 7 comments: 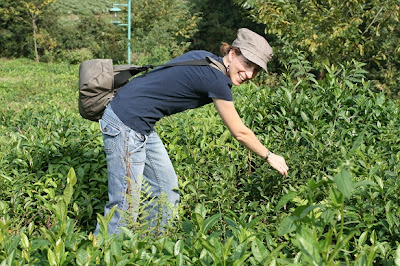 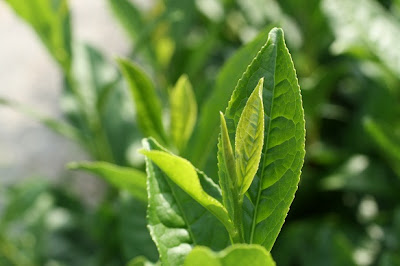 We were looking for "two leaves and a bud".  This tea is used to make green tea. 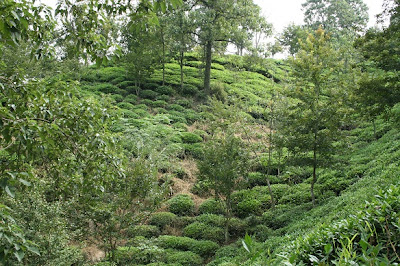 We were in the HuangShane area, in the AnHui province.  Both are very important areas for Chinese tea.
Posted by Steph at 5:30 AM 10 comments: 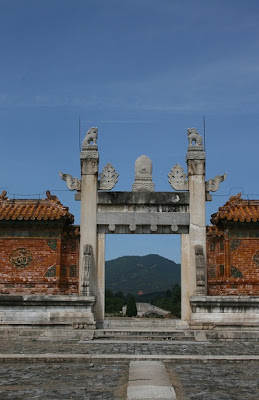 We're two days into this trip, and it's already been filled with wonder, adventure and "lost in translation" moments of cross-cultural oddities.  The photo above is from the Eastern Qing Dynasty tombs.  If you're ever heard of the "Dragon Lady" empress, she's buried here.  (She wasn't much loved by the people.)  So is the emperor who unified much of China (Qian Long), tho he was Manchurian (instead of the majority Han).  Our tour leader took us to these tombs, as they are very seldom visited by Westerners. In fact, we were the only non-Chinese people I saw.  The road to get to them was quite the adventure, too...detours, animated discussions with locals regarding directions, huge piles of rock in the middle of the road, and narrow gaps the bus barely squeezed through!  This one required Dramamine.
Speaking of roads...below is a typical scene.  I had to let go of the fear-for-my-life reaction.  It's amazing how all the buses, cars, motorbikes, bicycles, people, and the occasional animal flow together smoothly. 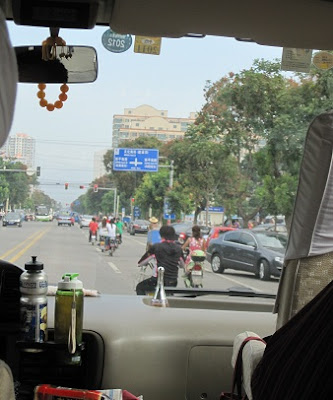 Photo 2 Street:  Notice in the picture above the driver's green bottle of tea.  That is with him always, and he refills it throughout the day from a thermos of hot water. 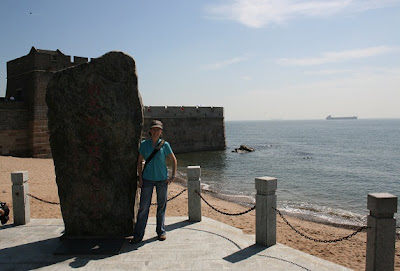 
Here's another destination that few Westerners see - it's where the Great Wall meets the sea. It's called the Dragon's Head.

Last evening after dinner, we strolled down a back alley to this lovely Confucius Teahouse.  We were served tea Gong Fu style, with a beautiful and knowledgeable hostess guiding us through the process to see, smell, and taste the tea.
The tour has just begun...I hope to send more in a few days.  Thank you for joining me! 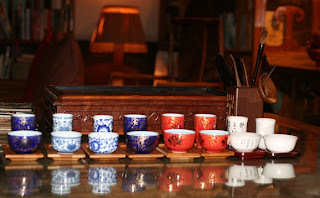