Tracing the Early Route of Tea into Europe 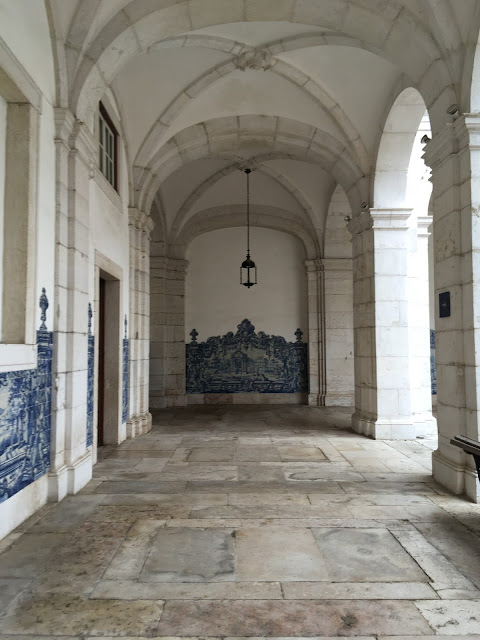 I've been wanting to write this blog post for two months. I'm not prone to writer's block, but I didn't know where to begin. Well, here it is: For a tea lover, I've recently had the most wonderful opportunity to travel from Macau* to Portugal (OK, Spain was in the middle, but we won't hold a grudge).  Tea Friends - As you may know, Macau to Portugal is a primary historical route of how tea made its way into Europe. This just makes me totally tea geek out!

Where to start?  Egg tarts.  If you've ever enjoyed dim sum, you were most likely tempted by these delightful treats. They remind me of my grandmother's custard pie. The first one below I enjoyed in Macau and the second in Portugal. The sweet came to Macau along with the Portuguese traders, and tea went the other way. 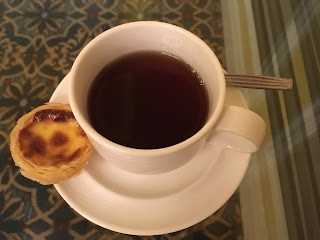 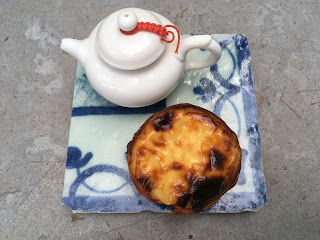 The first Portuguese ships made their way to China in 1516, but it wasn't until over 40 years later that missionary Gaspar da Cruz wrote the first Portuguese account of tea. Macau was leased to the Portuguese as a trading post in 1557 (though it had been in use prior), and 330 years later was negotiated as a Portuguese colony. This gave Portugal huge advantages over its trading rival, the Dutch, who didn't build a stronghold until 1624, on the Isle of Formosa (Taiwan). Let me say that any time one culture thinks it knows best (colonization) there are many ugly outcomes. I don't want to romanticize this historical epoch. Rather, I'm attempting to explain why tea was consumed in Portugal. The Portuguese were among the earliest European traders with China. Good ideas (tea) move quickly across cultures.  Read more in this interesting Smithsonian article.

You've likely heard about Catherine de Braganza, the Portuguese princess who married England's Charles II in 1662. Tea drinking was yet an oddity, a rarity, among the British. The now-Queen was a dedicated tea drinker and brought tea in her dowry, along with a port in Bombay. As does the Queen, so go the people. (Read more in this BBC article). 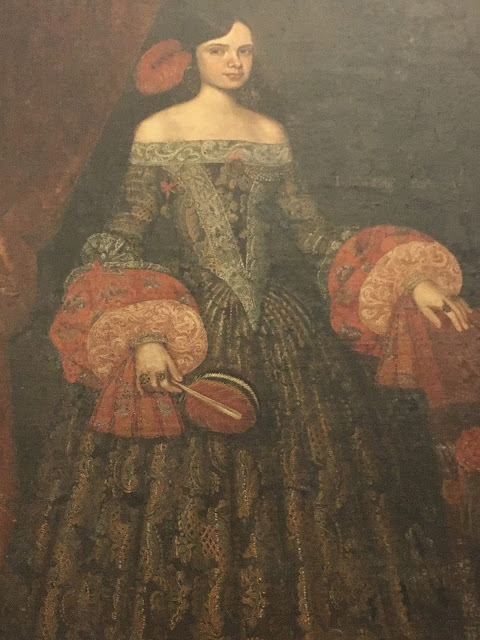 Portrait of Catharina de Bragança, São Vicente de Fora monastery
It's my favorite portrait of her, and the photo doesn't do it justice.

This union, of course, was a political one.  Catherine had suitors starting when she was eight years old. Her role in life was to be a negotiated bride to another country. England won her hand and her wealth. In return, Portugal received military help in protecting its borders from Spain.

When I visited Windsor Castle several years ago, I learned that Charles II built a southern-facing turret for Catherine. A nice gesture, especially since she was not a particularly beloved Queen. Her customs were different (she was Catholic and Charles had to make special dispensation for this). Her clothing was different. She preferred sunnier climes.  Charles had many mistresses, and he and Catherine were unable to produce an heir.

It's worth noting that when Catherine moved to England, she would have drank her tea from a handleless cup, probably one that came from China along with her tea.  Cups with handles made their entrance in the early 1700's. Catherine died in 1705, so it's possible she would have seen the transition. She returned to Portugal in 1692, over a decade after Charles' death. 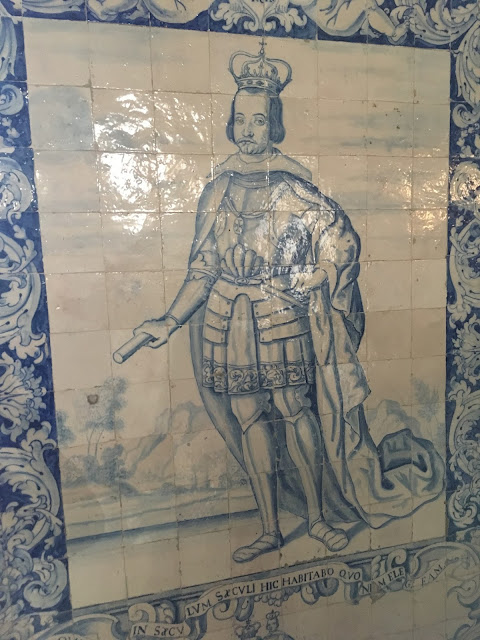 Catherine is laid to rest at the Monastery of Sao Vicente de Fora. You will find her tomb in the pantheon for the Braganza family. I find it interesting that her name, etched in gold, gives preference to her British title, as Queen of England. Should you find yourself in Lisbon, this is a must-see.  It's in the old part of the city. I spent three hours at the monastery, viewing the courtyard, the museum, the azulejos (amazing!!!), the pantheon, climbing to the rooftop and sitting in the courtyard drinking tea (bring your own) and toasting Catherine. 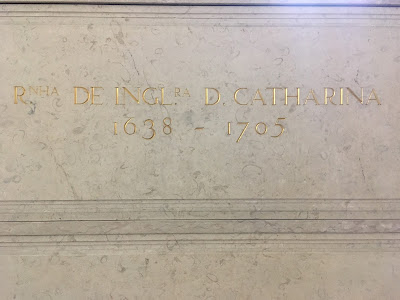 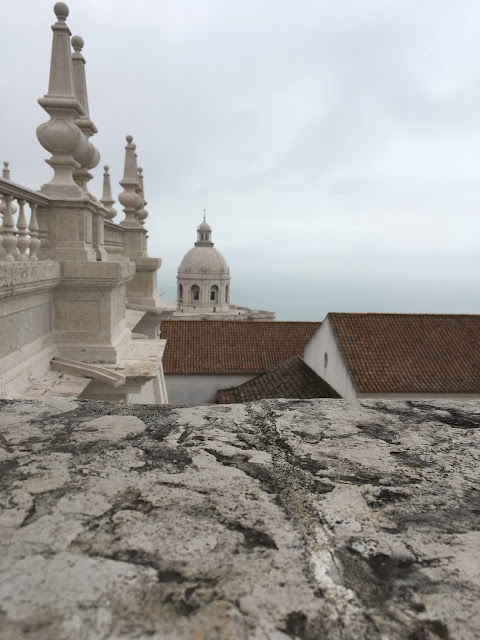 View from the rooftop of the monastery

You can also read more about visiting this site from Denise. And big thanks to her; it's because of her notes that I was inspired to find the monastery!

One more connection that showed itself while I was traveling.  The photos below are of a Chinese garden (within the Botanical Garden in Belém, region of Lisbon -- which is also where you can find the most famous egg tarts).  In the second photo, we've been transported back to Macau. :-) 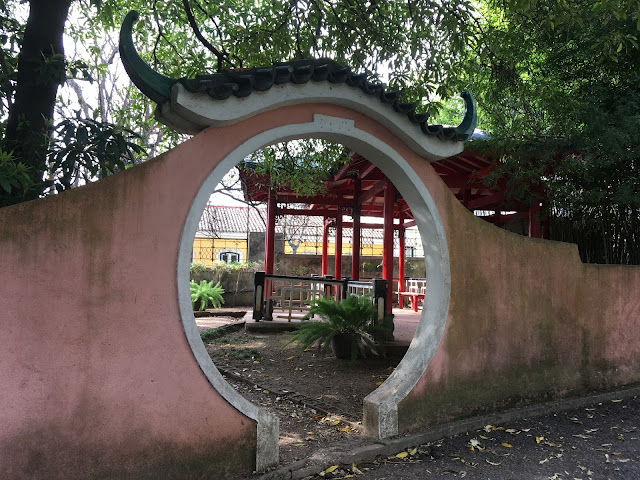 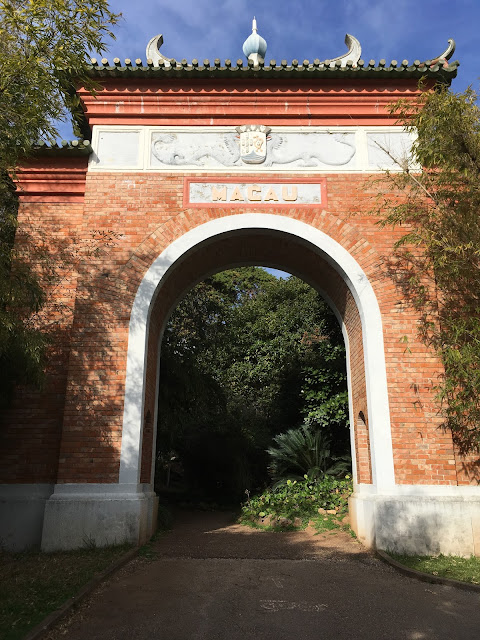 *Macau is the modern Portuguese spelling. Macao is the English spelling.
Posted by Steph at 11:29 AM 5 comments: