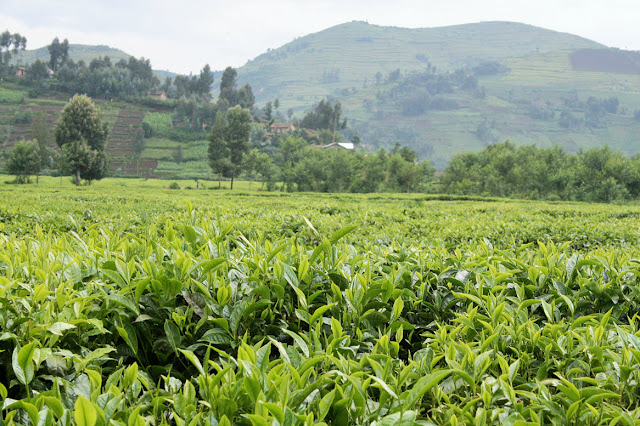 Imagine my elation when I learned that not only was I going to Rwanda, but that I'd have time to see a tea field while there! Part of my team spent the weekend in the Virunga Mountains, and it just so happened that Pfunda Tea Company had tea fields in the area.  Lucky, lucky, lucky me!  My heartfelt thanks to my teammates who were not only good sports about visiting the tea field, but also advocated for me to ensure that it happened!  (I think they even had fun.) 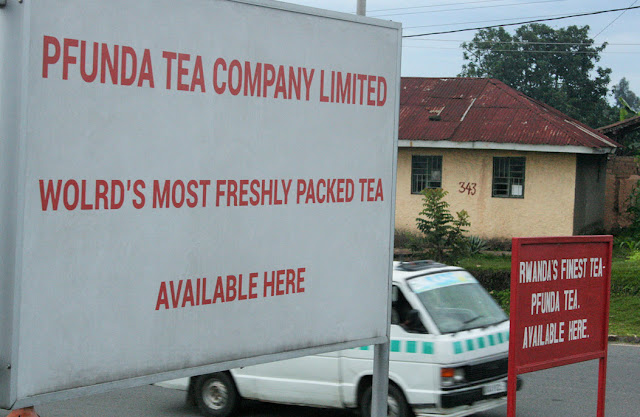 I hadn't noticed the misspelling of "World's" until the DH pointed it out.  :-)

The tea grown in Rwanda is predominantly made into black tea, though I was lucky to drink some Rwandan green. I'll talk more about the method of tea processing and economics in another post.  For now, I want to focus on the beautiful tea field! 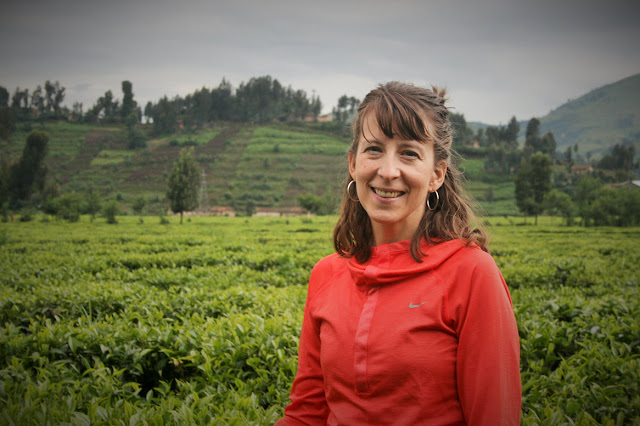 We visited the tea field in the mid afternoon, after the day's picking was complete.  We didn't see any tea pickers here, but we did find a weigh station nearby.  I will share that in the next post. 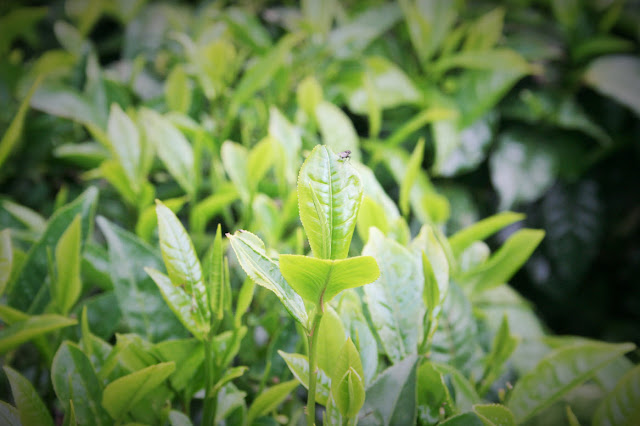 Do you see the fly?

Rwanda's elevation, equatorial climate and volcanic soil make a hospitable environment for growing tea. Over 90% of Rwanda's tea is exported. In fact, coffee and tea combined (in about equal measure) make up nearly four-fifths of Rwandan agricultural exports. If the Rwandan tea market is of interest to you, check out this article. 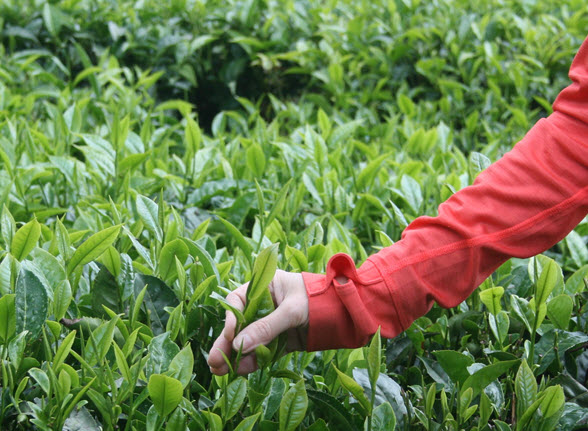 Rwandan tea, to the best of my knowledge, is picked by hand, typically by women. Even thought it's mostly prepared for the CTC market, low labor prices allow for hand picking. I wasn't able to definitively confirm this, but based on conversations I'm also led to believe that tea is picked year-round. This makes sense, given the steady and moderate climate. 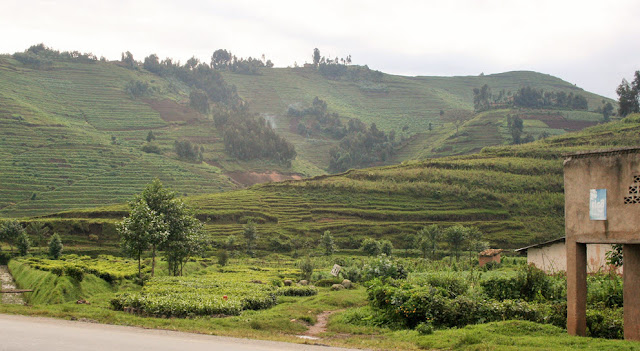 Rwanda is called the "Land of a Thousand Hills." You can see why from this picture. Any direction you look, you see hills nearby and mountains in the distance.

In another post I will explore the effects of the genocide on the tea industry in Rwanda. For now, please enjoy these beautiful tea fields!
Posted by Steph at 10:55 AM 6 comments:

Why I'm in Rwanda 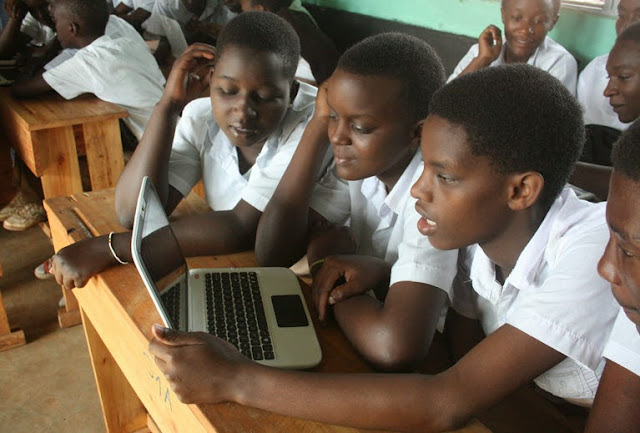 I'm here with an awesome team to help bring computers into schools, and primarily to help teachers learn to use them well from a pedagogical and technological perspective. It's a brave adventure for teachers, this trying out technology to augment lessons and increase student engagement.  We're focused on 21st century skills: communication, collaboration, critical thinking and creativity. It can be a frustrating experience for teachers, learning so many new things at once.

And then they see the eager faces of their students and they are encouraged. We all are.

Below: a physics experiment being captured on video. 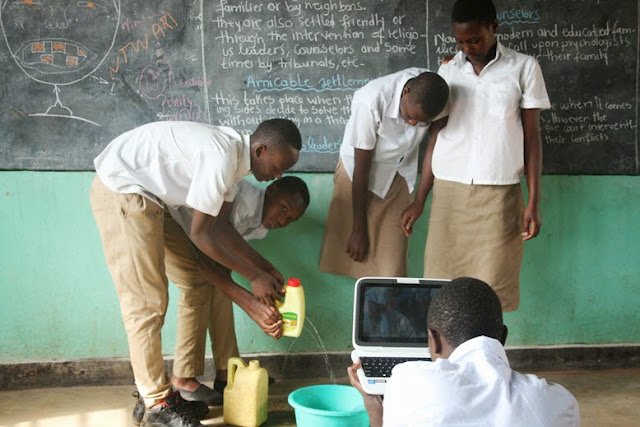 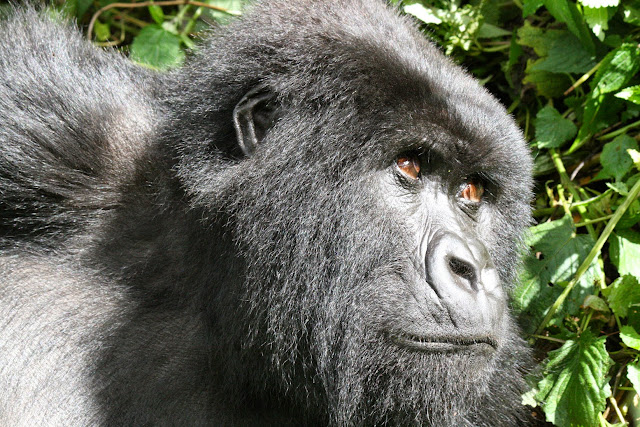 Yesterday, I did something of my dreams. I trekked in Volcanoes National Park in Rwanda to see Mountain Gorillas.  You might know of these gorillas from the work of Dian Fossey. We tracked the Sabyinyo group which is unusual as it has three silverbacks (adult male gorillas).

One of the silverbacks (above) gave us quite a show when we first greeted him.  He stood up and pounded his chest. The guide had warned us this could happen, and that it was a bluff. He was simply saying, "Hey there - I'm bigger than you!" The guide talked to him in gorilla language, and the gorilla simply sat down and then proceed to groom himself and ignore us. 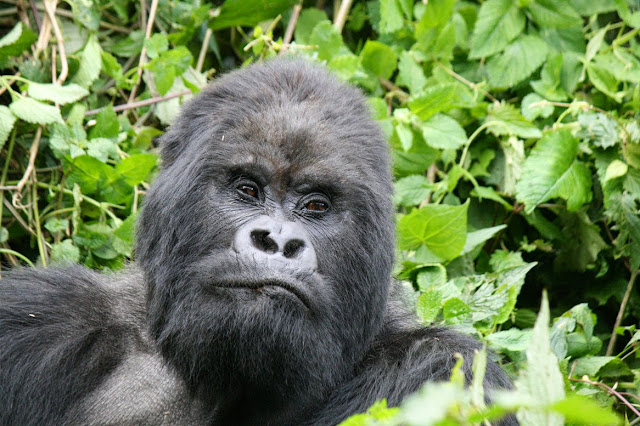 This wise gentleman is Guhonda. He is the oldest and biggest silverback in Rwanda, weighing in at more than 220 kg, 485 lbs. He barely acknowledged our presence and even took a nap. 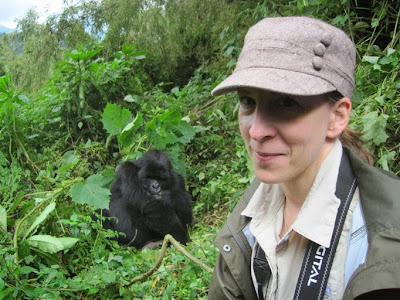 This is me with the first gorilla. I'm half in awe and half terrified. I'm about 4 feet away.

And below, a 6-month-old baby gorilla climbing on his big brother's back. 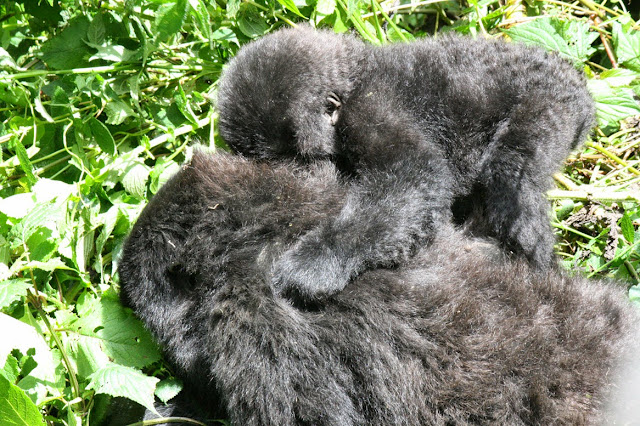 This baby gorilla was just adorable. He was curious about us and I thought might even approach us, but the guide discouraged that. He and his brother tumbled down the hill together. 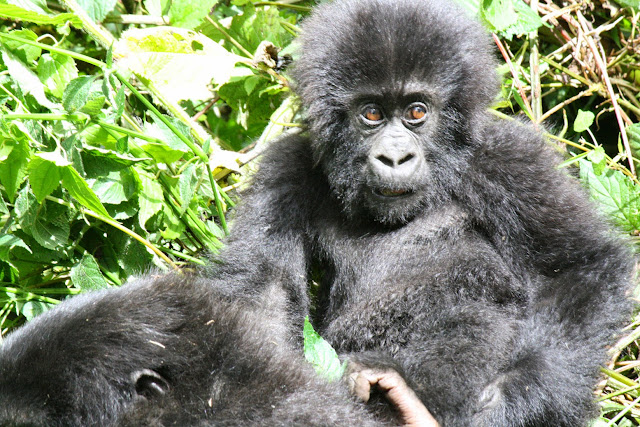 Our guides, Patrick and Placid (below), briefed us on the gorilla group, taught us how to behave when with the gorillas, and educated us on all manner of things including elephant footprints.  An elephant had passed by within a few hours. 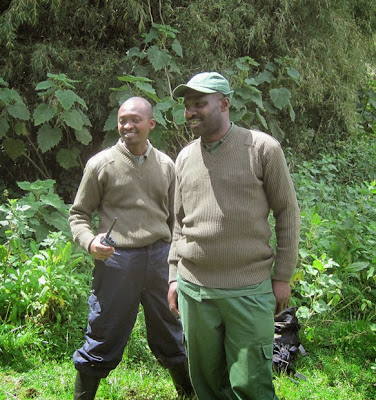 The hiking to get to the gorillas was challenging.  It's at elevation (you're in the Virunga Mountains). It's over slippery rocks, up steep inclines, and through very dense vegetation. The gorillas don't use trails, and so the last bit was through jungle with no trail.  One of the trackers used a machete to cut a path. As an aside, we were very lucky to have had sunshine. It's still the rainy season here and we could have just as easily been drenched. 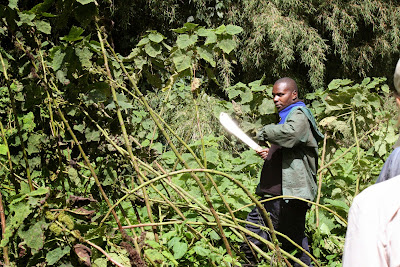 In another post I will write more about the porters.

This experience was just totally, completely, wonderfully awesome! My gratitude to all the people who have influenced my life to get to this point. First, my mom who taught me to be an independent and strong woman.  To my friends and family who were excited about the trip for me. And to my company, for affording me this opportunity. 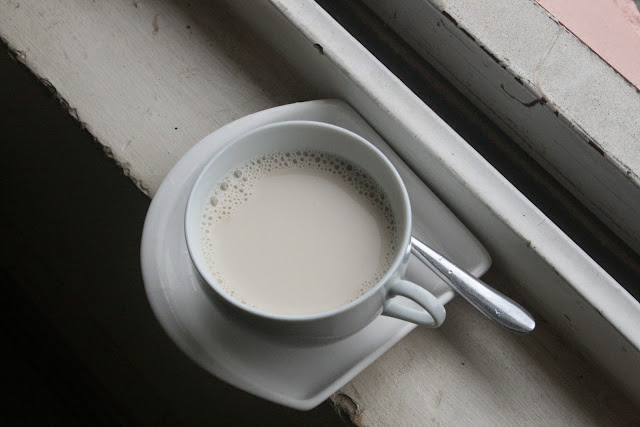 African tea, similar to Indian chai, but of its own character

OK, I've found yet another amazing style of tea.  In Rwanda, they call it "African Tea". It's similar in ingredients to chai, and yet entirely its own style.  It's made with milk, water, black tea and spices (ginger, cardamom, etc. - variations abound). The locals add sugar or honey. It's really, really, really delicious.  Here is a recipe.

And fattening!  ;-)  I'm pretty sure whole milk is used because a film forms quickly on top as the tea cools.  On that note, I saw a man on a bicycle this morning delivering milk, on a large silver urn. Milk is a big part of the Rwandan diet. 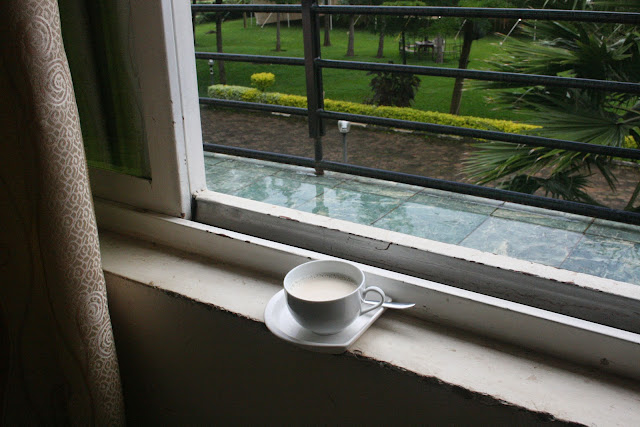 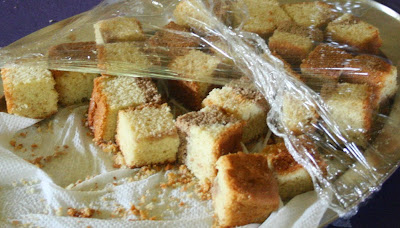 Snacks like this at each break time.  There were small cheese "tea sandwiches"
but they were gone in a flash so I didn't get a photo. 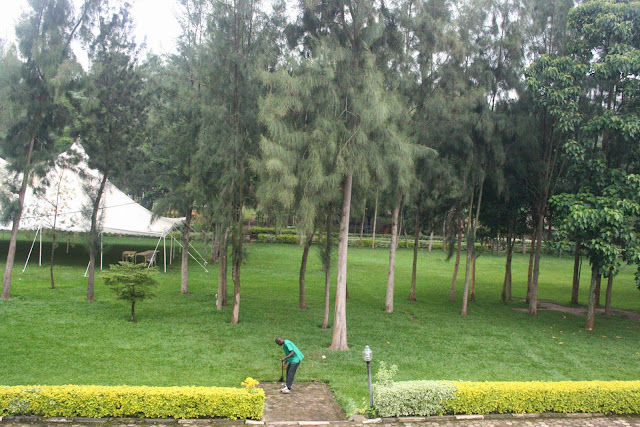 The grounds of our conference facility

Read more about the journey here: http://iescrwanda.tumblr.com/
Posted by Steph at 2:40 AM 8 comments:

The Impossibility of Understanding Genocide 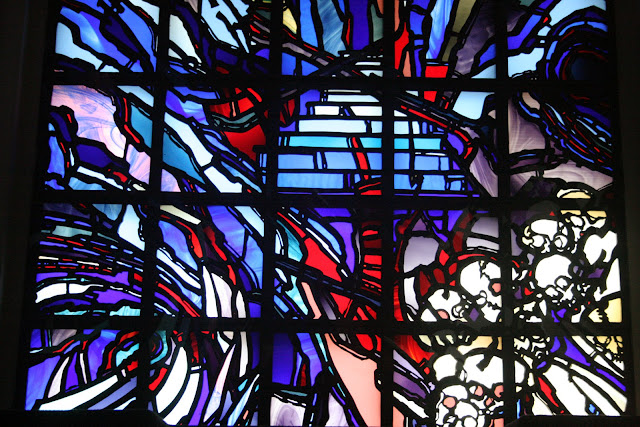 Stained glass by Ardyn Halter.  This one is called "Descent to Genocide"

It is impossible to understand genocide. I have been considering it a lot prior to this trip. We visited the Kigali Genocide Memorial. My thoughts are still settling on the experience, and I can imagine a lot of personal journaling in the future.

The synopsis:  Approximately 1 million Tutsi people (and Hutu allies) were killed in about a hundred days (April 7 - mid July), and another 2 million displaced. The killings were organized and carried out by the Hutu majority. 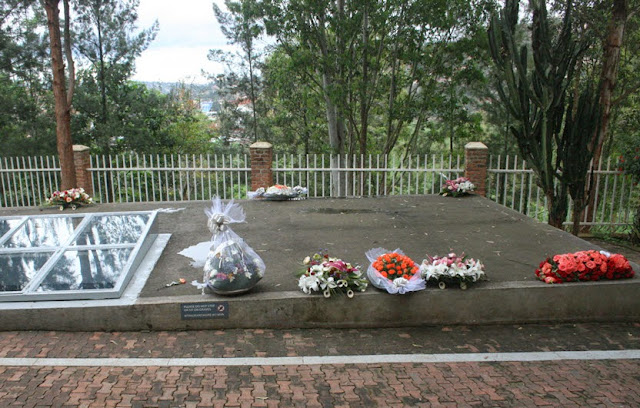 Over 250,000 bodies are buried at the Memorial Center. In fact, we observed a memorial service for a body that had been recently discovered, 21 years after the genocide. It's an important part of the healing for victims to be "buried with dignity".

See another slice of this story, the "official" blog for this project, at http://iescrwanda.tumblr.com.
Posted by Steph at 9:46 AM 5 comments:

First, congratulations to blukats for winning my blog giveaway!  And thank you all for the good wishes on my 10-year blog anniversary!

I am soon departing on a trip to Rwanda!  It's a volunteer service project sponsored by my employer. I am part of a team that will train teachers and technical staff on how to set up school networks and how to use computers in the classroom.  I am so fortunate to work for a company that supports this goodness.

Over the weekend while I'm there, I'm very happy to share that I'll get to visit a tea plantation, along with trekking to see Mountain Gorillas!  Rwanda produces a lot of black tea, mostly destined for tea bags. The tea fields grow in the misty hills and I can't wait to be there in person.

As time permits, I'll share photos and my personal experiences on this blog. In addition, you can find the "official" story here: http://iescrwanda.tumblr.com. 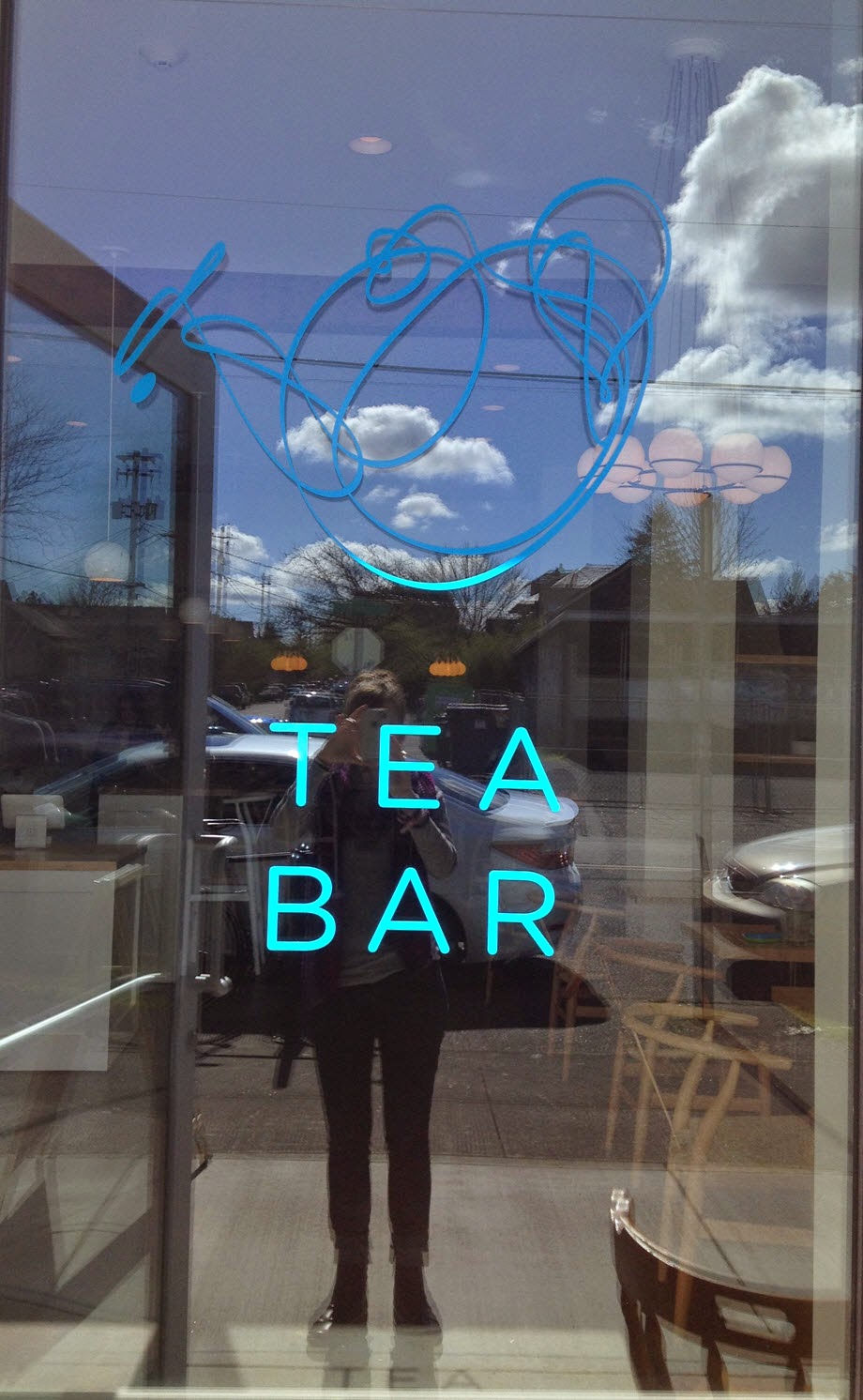 I am very behind in getting this blog about Tea Bar PDX written, and I offer my apologies to the owner, Erica, for the delay!

I visited Tea Bar PDX on a bright and unseasonably warm spring day, and the space was sparkling with light. It was a Thursday afternoon, and yet the shop was busy! Erica was helping to serve customers and still made time for me as she grabbed a bite of lunch.

I enjoyed a matcha latte (made with agave and light on the sweetness) as I asked Erica about her tea and business journey. She's got an interesting story to tell and you should visit to hear it from her first hand.

Erica credits Townshend's Tea on Alberta (another Portland tea shop) for inspiring her interest in tea. Add to that: She lived in China at the impressionable age of 16, she speaks Mandarin, she's joined up with her father's business in commercial properties, and Portland is an incubator for all things beverage. The logical outcome is Tea Bar.

I found the space to be peaceful and I'd like to return to with my journal and a good pen. Wifi is available (and I used it for a few work things), but it's also the kind of place where you can sit with a pot of tea and think. 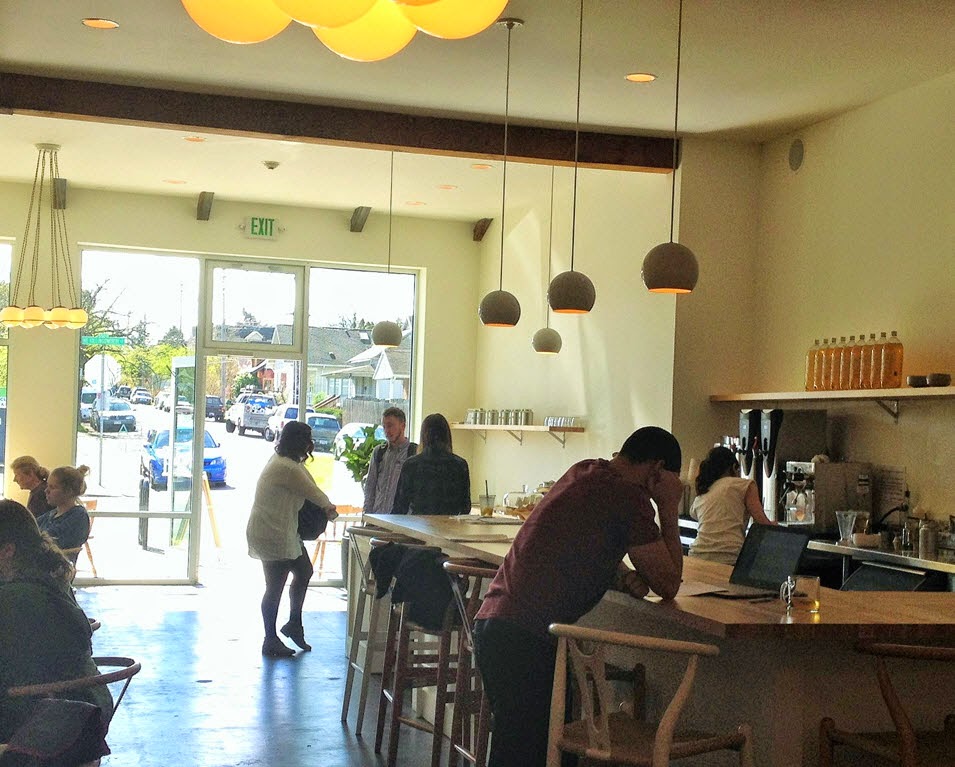 The space is minimally appointed 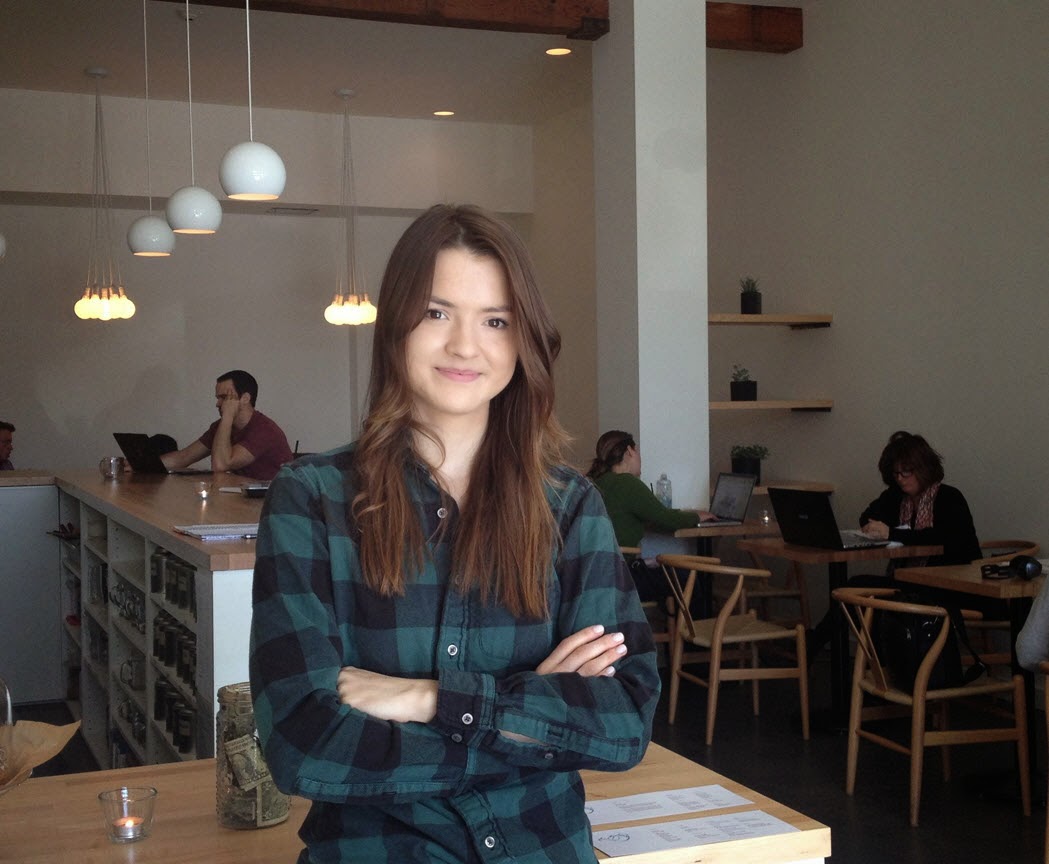 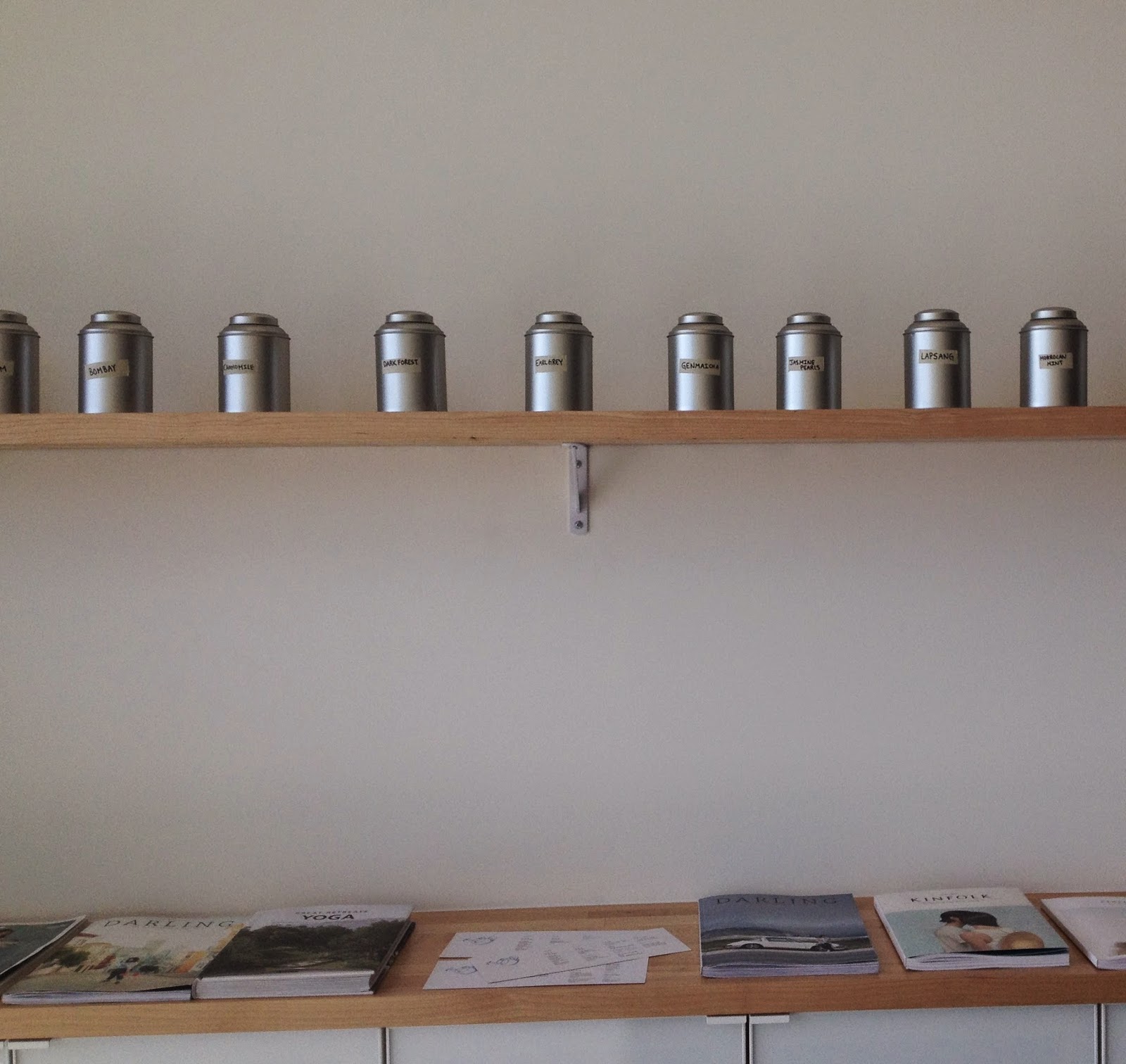 Canisters of tea above the magazine table 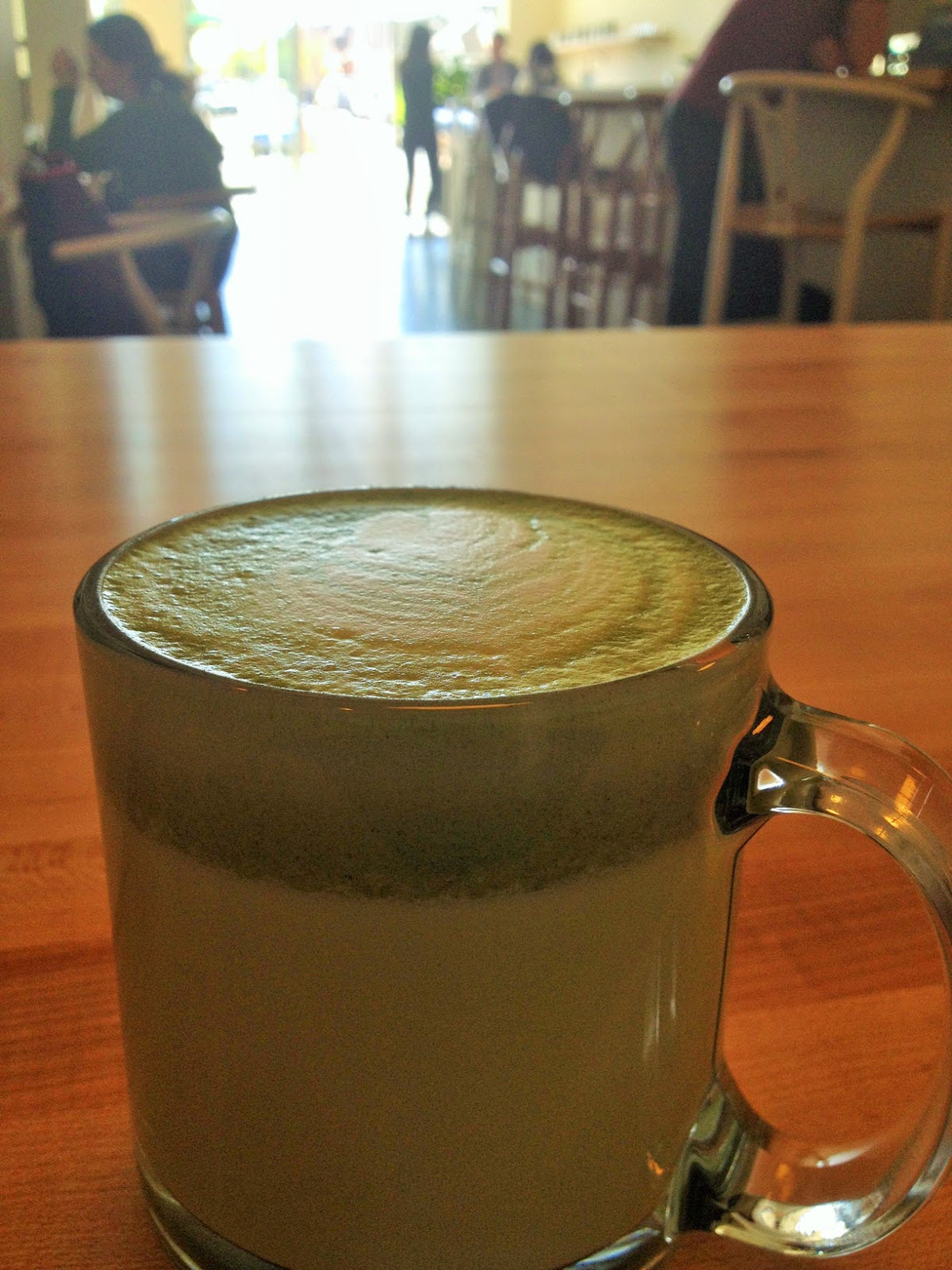 From the table at the back, I look over my matcha latte