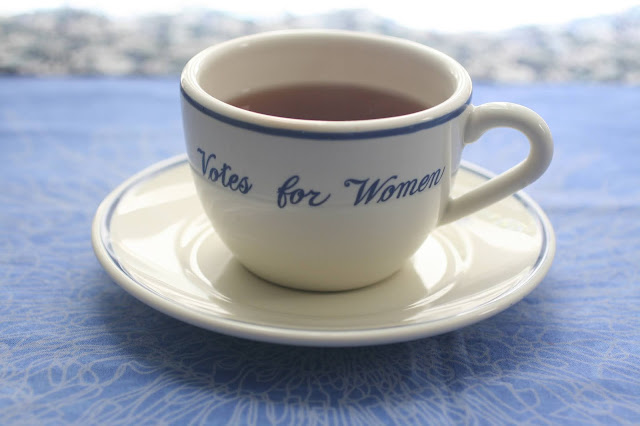 My copy of the tea set used by Alva Vanderbilt Belmont,
commissioned to raise funds for the suffrage movement.  More info
This month in the US, we mark the 100th anniversary of the 19th Amendment, which granted some women (mostly white women) the right to vote. The hard truth is that it took another 45 years for women of color to be guaranteed voting rights with the passage of the Voting Rights Act.
Tea was a fueling beverage for the women a century-plus ago, laboring for suffrage. As we note the hard-fought victory of the 19th Amendment, let us also drink in the bitterness of this tea -- that many sisters of color were unable to vote until 1965. And another 10 years for Americans whose primary language was not English. 1975 -- that's in my lifetime. A moment of silence to acknowledge these transgressions. And a commitment to work for social justice.
Following the model set by women in the UK, US women met over cups of tea to strategize and proselytize.  One infamous moment: In July 1848, Jane Hunt invited Elisabeth Cady Stanton to her home for tea, along with Lucretia Mott, Martha Wright and Mary Ann McClintock. These women were impassioned, and the gathering led to the Seneca Falls Convention just 10 days later.
Let us now name some of the Black Suffragists who worked hard for voting rights: Sojourner Truth, Daisy Elizabeth Adams Lampkin, Frances Ellen Watkins Harper,  Mary Ann Shadd Cary, Mary Church Terrell, Nannie Helen Burroughs, Ida B. Wells.  Latinx suffragists include: María Amparo Ruiz de Burton and Adelina Otero-Warren.  Thanking Indigenous/Native American suffragist Zitkala-Sa and the Iriquois model of inclusion. Gratitude to Chinese-American Mabel Ping-Hua Lee and Japanese supporter Komako Kimura, who came from Japan to march with women in New York.  These are just a few of the many women of color who were committed to the cause.

The ingenuity of the suffragists impresses, still today. They used tea parties to educate others, enlist support and raise money.
There were at lest two special brands of tea sold for the cause, Equality Tea being one. Given that tea packaging is fragile, little physical evidence of this remains.
In addition to the tea set shown above, the National American Woman Suffrage Association sold a demitasse cup and saucer embellished with "Votes for Women" on a gold rim.
Image left: courtesy the California Secretary of State
Image below: courtesy liveauctioneers.com 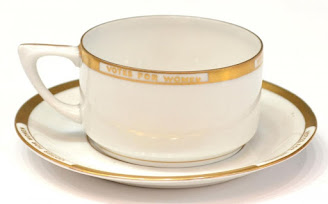 By the way, I've just learned that in the US, the preferred term was suffragist (not suffragette).  Read more.
I'm indebted to and inspired by these suffragist women. I continue to think about how tea can play a role in the work of social justice. 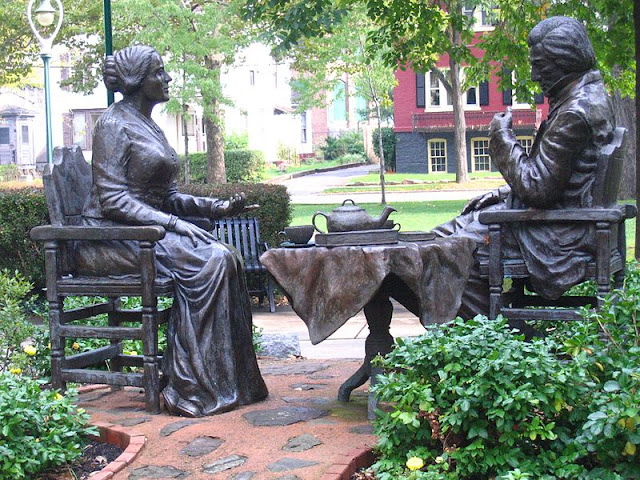 Susan B. Anthony and Frederick Douglas statue in Rochester, NY
"Let's Have Tea" by Pepsy Kettavong
Image from commons.wikimedia.org
Posted by Steph at 9:26 PM 3 comments: