Ireland: A Piece of my Tea Heart

Happy St. Patrick's Day!
Ireland holds a special place in my heart when it comes to tea. You see, it was in the Shelbourne Hotel in Ireland that I first had a formal afternoon tea. That was approximately 10 years ago. I had been a fan of hot tea my whole life, and I held tea parties with my grandmothers. But it was Ireland that gave me my first look at a three-tiered stand and the fancy foods with all the trimmings.

I remember the scene well. It was my last day in Ireland. I had been to Leixlip for a work trip, and stayed the weekend in Dublin. It was an event of special import for a number of reasons, including that it was my first time to travel outside the US alone and I was staying in a youth hostel alone, both of which pushed me to the edge of my comfort zone. But I stayed with the challenge and have such wonderful memories!

The tea story goes like this...I had spent the day shopping in Dublin and was eagerly anticipating the pinnacle event of the week - afternoon tea in the Lord Mayor's Lounge of the Shelbourne Hotel.

I remember walking into the tea room and seeing all of these well-appointed, sophisticated-looking people (men and women) having tea. I felt a bit under-dressed, as I had on simple slacks and a sweater. Most of the women were in hats! But the hostess was kind to me and I was made to feel most comfortable. The savories featured salmon sandwiches. I don't think I had ever tasted a more heavenly morsel. Then came the scones - oh, my! And I thought they were dessert. Imagine my surprise when out came the bite-sized chocolate cake, the shortbread cookies and the fruit tartlets.
On a related note, I was in London last year just before St. Patrick's Day. I was on the Tea in London tour, and it was magnificent! To celebrate my year anniversary of going on that tour, and with a nod today toward the British Isles, I pulled out a cookbook I had purchased last year in a used book store on Channing Cross Road. 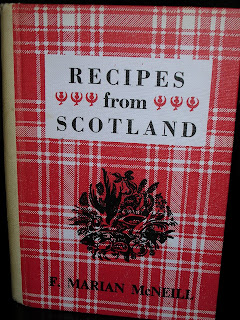 The cookbook has old Scottish recipes. Scottish folks are often credited for being the originators of the scone. Last night I made Treacle (Molasses) scones. I had to do a bit of interpretation for the measurements. I will give you the originals and my guesstimations below. The scones turned out well, so I think I guessed correctly. Also, note that these scones are not overly-sweet , which I appreciate. (I can hardly eat a store-bought scone because they are too sweet!) 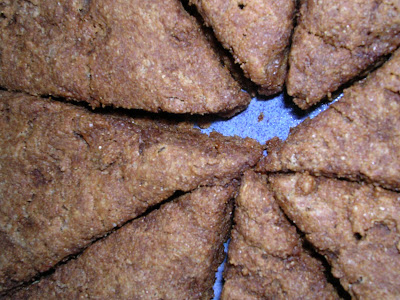 Treacle (Molasses) Scones
1/2 lb. Flour (about 1 cup, and I used whole wheat)
1/2 teaspoonful Bicarbonate of Soda (baking soda)
1/2 teaspoonful Cream of Tartar (scant)
1/2 teaspoonful Cinnamon
1/2 teaspoonful Ginger
1 teaspoonful Sugar
1 tablespoonful Treacle (molasses)
1 1/2 oz/ Butter (about 3 1/2 tablespoons)
Buttermilk to mix
Mix all the dry ingredients well. Rub the butter into the flour. Mix the treacle with a little buttermilk. Stir into the flour mixture, adding enough extra milk to make a stiff dough. Knead lightly, roll out to 3/4 inch thick. Form into a round and cut into 8 triangle pieces. Place on a greased tin in a good oven (I used 350 degrees) and bake ten-fifteen minutes. (Mine needed a good 15.)

It was from the trip to Ireland that I resolved to make tea a regular part of my life, and tea has taken me so far. I am humbly grateful!
Posted by Steph at 7:30 AM

Greatly enjoyed reading your memories of the trip to Ireland, and very appropriate that you're sharing them today. Thank you!

Thanks for sharing, Steph. I have always wanted to travel to Ireland and will now add "afternoon tea at the Shelbourne Hotel" to my list of reasons why . . . Also, I want to add that my own experiences staying at a youth hostels in London and Scotland pushed me to the very edge of my comfort zone.

Those scones sound fabulous - thank you for sharing the recipe! :-)

Wow - what a great story to go with St. Patty's day! You do those tea-drinkin' irish proud!

i have never been to ireland, but my sister has been three times and she just loves it!

I had the BEST cup of tea I ever had in my life....in Ireland.
I will never forget it. :~)
Must have been the "moment." HA!
It's good to know that you have been there as well. It is an amazing country isn't it? I loved it and the people.
Thanks for sharing your experiences.
Great memories.....

Thanks for sharing your story and the recipe!

Sounds like you have had some wonderful tea experiences in the UK. Sadly, I was very young when I visited England and Scotland and did not make taking tea part of my trip.

The scones sound great. I do have some molasses in the pantry and can't wait to try making some. Thanks for sharing the recipe.

Thank you for the great scone recipe!

A copy of this little book, Recipes from Scotland, is sitting on my desk right now! A recent gift from a friend, I've been trying to decide which recipes to make for our upcoming Tartan Tea. The treacle (molasses) scones were one of the choices I've made. Glad to have the conversions you provided! Nancy