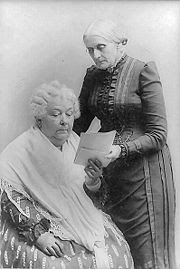 I published this back in 2009, but thought it was time to share it again!

In honor of Women's History Month, I'm going to tell a story that began over the tea table.  It's July, 1848. Elizabeth Cady Stanton joined four friends for tea in upstate NY. Perhaps over several cups, Stanton shared her frustrations with the limitations placed on women. Women had not yet felt the freedoms of a new Republic, even though many women had fought for it just like men, only 70 years earlier in America's break from England. Stanton had high hopes that the new nation would engage its women more actively. Her friends shared that opinion, and they began to make plans to bring it to fruition.


Stanton went on to draft a "Declaration of Sentiments," using the Declaration of Independence as the framework. She named many grievances including: women were not allowed to vote, married women were considered legally dead by the law and had no property rights, women were not accepted into universities, and many more.


Stanton's work and the work of other women culminated in a women's conference (called the Seneca Falls Convention), July 19 and 20, 1848. Read an original report from the event. Lucretia Mott was a key player in the convention. Both Mott and Stanton (along with Susan B. Anthony) died before women gained the right to vote. I hope those three souls were able to appreciate that victory in 1920.

The story of tea and women's rights isn't finished yet. The tea room became a socially-deemed "appropriate" place for women to meet, and many tea rooms are famous for giving wings to women's suffrage efforts. The book Tea at the Blue Lantern Inn is one of my favorites. It explains how the convergence of the automobile, women's suffrage and the temperance movement led to the cottage industry of tea rooms along the Eastern coast of the US. Women of independent means!


There is so much more to this story - I hope you take some time to discover it. And leave me a comment with your favorite moments of women's history - past, present, or hopes for the future!
Posted by Steph at 6:54 PM

I forgot to mention the great film Iron-Jawed Angels. http://www.hbo.com/films/ironjawedangels/

Also, the fictional book The Teahouse Fire touches on the subject of women's role in the Japanese Tea Ceremony. http://stephcupoftea.blogspot.com/2008/04/book-review-teahouse-fire.html

Oh, how I want to Photoshop that image of Stanton and Anthony to put teacups in their hands! And I just got a copy of "Tea at the Blue Lantern Inn," so I'll look forward to reading more!

Angela - That Photoshopping is a brilliant idea!

I toured Marble House in Newport, Rhode Island -- the summer home of Alva Vandervilt, who hosted many tea parties in support of the suffrage movement. Alva had entire sets of teapots, cups, and saucers that had "Votes for Women" written on them in blue script. I bought a replica Votes for Women teapot in the Marble House gift shop and love it.

The guided MP3 player tour did pose the question of what the maids who worked in that luxurious house and washed all of those teapots thought about "votes for women."

MS Mep - Oh! That's a great story! I did not know about it. Thank you!

And a "votes for women" china example: http://historical.ha.com/common/view_item.php?Sale_No=1083&Lot_No=305&src=pr

great post. i wrote a paper on this in college. i can't believe how far we have come. it makes me feel so thankful for where we are now, compared to where we once were.

Anonymous said...
This comment has been removed by a blog administrator.
10:21 PM

I remember my grandmother being a bit of a suffragist and talking about the women's right to vote. She was also involved in the temperance movement and highly recommended herbal teas. She was rather outspoken and as young children myself and cousins would tease her about it. Now I wish I could sit down with her and hear what she had to say. The Teahouse Fire was definitely an amazing book to read.

Great post! Thank you for the book recommendation of Tea at the Blue Lantern Inn. Looks very interesting. While the women's movement for equal rights has made significant strides, I hope to see a better family leave act (comparable to many European nations) and more efforts for equal pay.

Thanks for sharing this interesting post again, Steph! My favourite moment of women's history is the Famous Five from Alberta who fought to have women recognized as "persons" under Canadian law.

The Women are Persons! Monument in Calgary commemorates the Famous Five's achievements and awesomely includes teacups and saucers!