My tea theme for October is East Frisian Tea. I recently had the honor to be served East Frisian tea and learn about this tea culture, then shortly after, to serve East Frisian tea to friends on a lovely fall day sitting on a deck in the woods. I am also hosting an East Frisian tea this weekend and will share photos.
East Frisia (Ostfriesen) is a region in the Northwest of Germany. East Frisia connects with the Netherlands.
Most of Germany is a coffee-drinking country, but in this particular region, tea is very popular! East Frisian tea is made from a strong black tea that is sweetened with rock candy and then topped off with real cream.
I had the great privilege of being schooled in this tea method recently from a friend whose sister lives in East Frisia. My friend served tea in delicate blue and white china. This tea is typically served in small cups, which reminded me of espresso cups, as did the tea itself - it is very strong!
To prepare the tea:
1 - Add the rock candy (called Kluntje) to the cup. 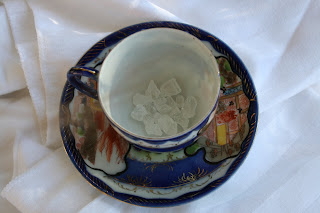 2 - Pour the tea. It should be strong and dark. Listen carefully - you will hear the rock candy popping. 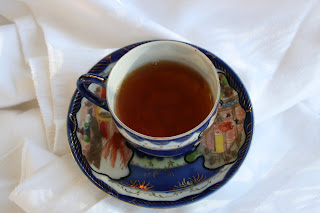 3 - Add the cream in clouds, small drops around the edge of the cup. First it looks like this: 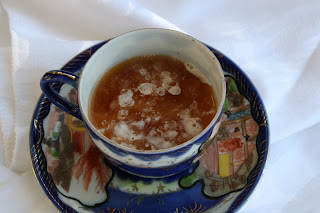 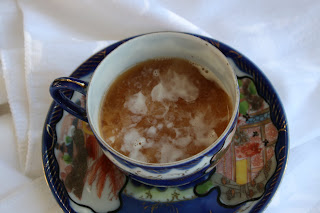 4 - Look at the lovely design on the surface of the tea, take in the aroma, and savor the flavor.
The combination of rock candy, tea and cream allow for a layered drinking experience, especially if you don't stir the tea. (My friend indicates that East Frisians don't stir.) The first few sips allow the tea and cream to meld, and as you drink more, the sweetness enters.
As an aside, I'd like to point out that the use of cream in tea is unusual. Most tea experts prefer milk in tea, not cream. Cream is too overpowering for most teas. East Frisian tea is an exception! The tea is strong, almost concentrated. My friend said she steeped hers for 8-12 minutes and always keeps it hot on a tea warmer.

East Frisian tea is generally served with cookies or cake.
I am lucky because I have a special tin of tea that came from East Frisia. However, you can find East Frisian tea in the US. Try the Harney & Sons version. I have not tried it, but highly respect the H&S company.
I will share photos early next week from my East Frisian tea this Sunday. I'm very excited!
Posted by Steph at 8:43 AM

I like the new photo, too. This tea party sounds fantastic!! I wish I were closer.

I hadn't heard of East Frisian Tea served like that. Thanks for the tutorial.

Wow - I was unaware of this style of tea. That's very cool. Thank you for sharing!

That's very interesting. I love learning about other tea cultures. I first had East Frisian at The Tea Room in Savannah. By the way, I too LOVE your new profile photo. Lovely - just like you!

Fantastic. Love the images and the way you step us through the process. Thanks.

That sounds delicious!!! I do love strong tea so I will have to try this. (Of course, I love sugar and cream as well. ha ha.)

what a nice post on Ostfriesen-tea! If you can manage, try to get thicker sugar-crystals. Kluntje is normally 1.5 - 2.5 cm in diameter, so you can staple some of them in a small "Koppje" (cup) as a mountain. The top of this, called the ice-mountain, will be above the surface of the tea and "Wulkje" (cream-cloud). And always ask for thick cream. Whipped cream normally has got 30% fat, in Ostfriesland you can get special tea-cream with 36%.

If I may add some words to your post, as I am from East Frisia, though currently living in Berlin. As to me, Ostfriesen-Tea ist not a favorite beverage, yet a live-saving infusion (as a German friend once pointed out).

You are absolutely right not to stir the tea. We use two forms of spoons while having tea. One (formed like an "s") is taken to layer the cream in the cup, moved like an ascending half moon. The tea-spoon which every guest has got on his "Slubbertje" (saucer) is just for decoration, never for stirring. Or, to be precise: If you place it in the Koppje, you thereby indicate you don't want a refill. Doing so before having had at least three Koppjes is considered to be very impolite - "three times is East Frisian law!"

And, by the way, there are three museums on East-Frisian tea-culture, two in Norden, one in Leer.

Back to tea preparation: Ostfriesen-tea ist probably the strongest blend in the world of black teas, containing strong Assams, Indonesian and Sri-Lankan teas (note that East Frisian mix the teas of the former British and Dutch colonial empires). Brewing the tea, take one teaspoon for each cup and "one for the pot". Use one pot for brewing (called "Treckpott") and one for serving. Best treckpotts are of unglazed ceramics so the tea will go into it and the pot becomes better any time you use it. It is only cleaned with hot water, never with soap.

When brewing, warm both pots, using hot water. Place the tea in the treckpott and pour it with boling hot water. But first, only fill in so much that the leaves are just covered - we call it "anbrühen". Now let it steep for about 3 minutes (which is considered to make the tea even stronger). The treckpott should be placed on a tea-warmer. Than fill the whole pot, again using boiling hot water, and steem as long as you like - five minutes? eight? ten? Just try what is most tasty to you!

Best regards, and enjoy your tea!

I forgot the English tranlation of the restaurant in Wiesmoor: The blue pheasant.

Dear A. Ude - Thank you so much for your fascinating contributions! What a gift, I am grateful!

i too am grateful! as i just this summer learned i am of Frisian descent! and a longtime tea lover! so this is fascinating ...
thank you , Steph, for posting :)

I am thrilled to find a fellow East Frisien tea lover, and I can attest to Harney's blend, it's my morning cuppa. I can see spending hours reading your blog just to catch up!

Luckily a planner knows what needs to be done like the back of their hand![url=http://www.searchspecialist.org/post-search-specialist-jobs/]polo t shirts[/url] These designers believe in sticking to the basic style shoethe traditional, vintage fashion clothing look.Fourty five percent of them had the wrong width, which was mostly too narrow.

Dress up as a girl dressed up as a guy dressed up as a girl Dracula by checking out this makeup tutorial.[url=http://www.realtimespain.com]ralph lauren madrid[/url] Well, there are just a few simple steps to getting the background on CP.IT WAS A WIPEOUT WHERE IT'S LIKE WHERE AM I?

And so what if she calls herself black?[url=http://www.buckscountyskiclub.com/web-links.html]ralph lauren shoes[/url] Important family events like weddings and graduations also occur infrequently and require a great deal of advance planning.It held its first race in Daytona Beach, Fla.