Queen's Cakes for the New Year 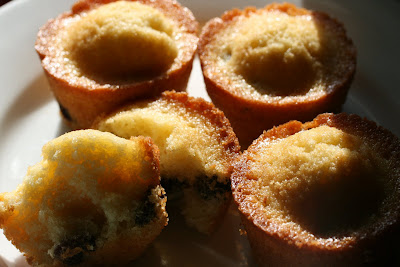 I made these Queen's Cakes for the New Year, and I really enjoyed them, especially fresh from the oven. The golden edges are crisp and the raisins impart a nice flavor and texture to the very simple batter.

The recipe came from the book Dinner at Buckingham Palace. I was delighted to find this book at my library. I had often seen this book advertised in the Victorian Tracing Co. catalogue and wanted to peruse the book. The recipes are interesting, and I'm glad to know that the library has a copy. It's not a book I feel compelled to own; borrowing is perfect. 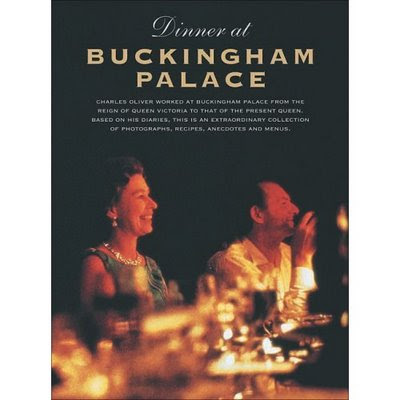 The book, by Charles Oliver (who spent most of his life in service to the Queen), is a compilation of stories and recipes from the kitchen of the current Queen and her family. There are some very interesting anecdotes and photos. It's a very enjoyable book, though I found very few recipes that I would actually attempt to make. Queen's Cakes were in the Tea section. As an aside, these little yellow cakes are often served on Victoria Day in Canada to celebrate Queen Victoria's birthday.

The tea section was, of course, my favorite. Tea is "one of the Queen's most favourite meals." The recipe below for Queen's Cakes is approximately what was in the book. The recipe is from my memory, (I already returned the book!), so use at your own risk! The recipe was given in ounces, and I was grateful for my kitchen scale. Also, the recipe was rather sketchy on details...so I've added a few tips.
4 oz (1 stick) margarine (I used butter)
4 oz sugar
2 eggs
4 oz all-purpose flour
1 tsp baking powder..I can't actually remeber if it was one or two
2 oz sultanas (I used purple raisins)
A little milk

Grease 16-20 mini muffin tins. (The recipe just said "tins." I had to do a lot of research to figure out exactly what size! I compared to other Queen's Cakes recipes.) The recipe called for greasing with lard, but I used shortening.

Cream the butter (I softened it first) with the sugar. Add the eggs and beat well. Sift together the flour and baking powder, and add to the creamed sugar/butter/eggs a little at a time. Stir in the sultanas. Add a little milk to make the batter soft. (This is where I was puzzled - what was "soft" supposed to mean? I added about 1/4 cup milk.)

Spoon into mini muffin tins, until they're about 1/2 full. Bake for ~20 min, until golden brown.

These are best served fresh from the oven, when the golden edges are crisp and the centers are soft. Very nice with tea! I like these for their simplicity. As I looked online for other Queen's Cake recipes to compare, I found that many recipes are actually fancier than this one. I preferred to stick with the simple version, since it's fit for the Queen!
Posted by Steph at 7:28 AM

Thanks for the book review! The Queen's Cakes looked yummy - perfect with a spot of tea.
Nancy

The Queen's Cakes look delicious. I can't believe that I grew up in Canada and was never aware of the tradition of these little cakes and have never tried them. I will have to see if my local library system has the book. It looks interesting.

Your Queen's Cakes look delicious and would be perfect with a cuppa!