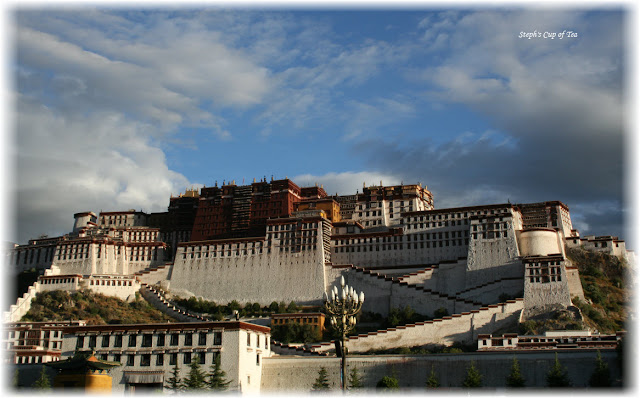 The Potala Palace in Tibet sits amidst dramatic skies

It felt a little (OK, a lot) surreal to be climbing the steps to the Potala Palace, the former home of the Dalai Lama and seat of government.  Today the building is a museum, an assembly space for the Buddhist monks and a World Heritage Site (along with one of the "new" Seven Wonders of the World).  The complex has over 1,000 rooms and rises 1,000 feet above the valley floor.

Construction began on the Potala Palace (more commonly called "Peak Potala" by locals) in 1645, under the fifth Dalai Lama.  He died before construction was complete and his death was kept a secret for 10 years in order to ensure the project was finished. 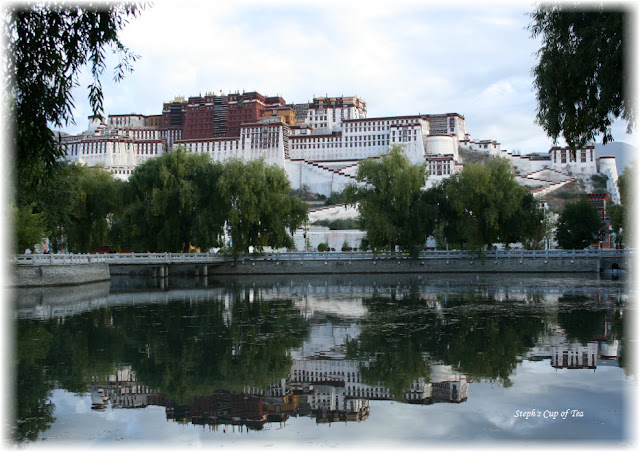 An interesting tea connection...it's thought that the current structure is built upon the grounds of another palace, that of King Songtsen Gampo.  In 637, he had a special building constructed to greet his bride Princess Wencheng of China.  She is sometimes given credit for introducing tea (pu-erh) to Tibet, having brought it in her dowry.  This is most likely untrue.  Scholars believe tea had already made its way from China to Tibet via trade routes centuries earlier.  Moreover, our Tibetan tour guide very strongly believed that tea grows natively in Tibet.  Nonetheless, the presence of tea in the princesses dowry shows the value placed upon it at that time.  (The story reminds me of one that would repeat itself many years later, when Catherine de Braganza brought tea to England.) 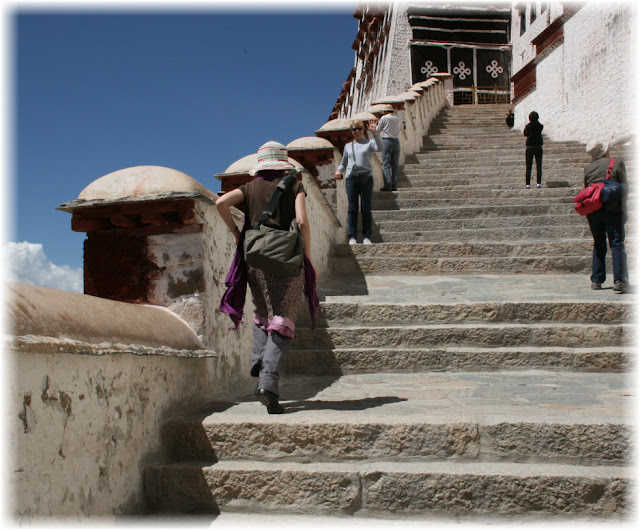 That's me on the left in the striped hat

It was a long climb to the top.  The flight of stairs above is one of many we ascended.  Every 20 steps or so I would stop to catch my breath and take in the view.  Given the effects of the high altitude, the intense sunlight and the necessary physical exertion, we felt like champions when we reached the "summit".  We were invited into the "highest restroom in the world," which I will always remember because it makes me chuckle (though I don't think it's true).  Most of us didn't require the facilities as we were having to work hard to stay well hydrated. 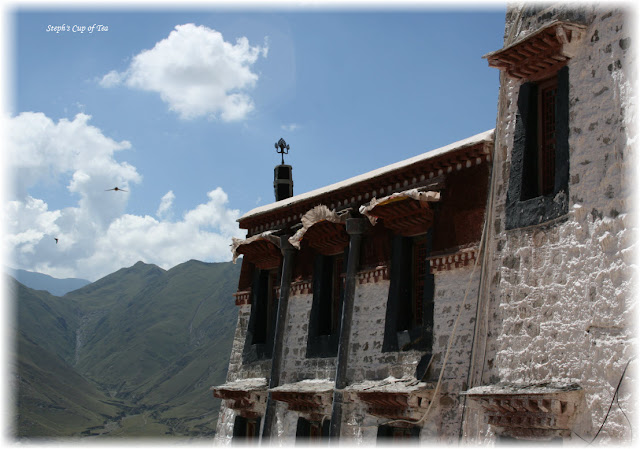 One of my favorite photos

As you can see from the images at the top of this post, there are two parts to the complex, the red and the white.  The red portion is devoted to religious pursuits.  We saw beautiful murals, religious art, large gathering spaces and more of the dark narrow hallways I wrote about here.  We were not allowed to take photos inside, and I think that is a respectful policy.  The white portion was home to the Dalai Lama and administrative/governmental offices.  (Since 1959, he no longer lives in Tibet.)  We were allowed to visit only a portion of the complex.

In order to visit the Potala Palace, our tour guide secured tickets for us the day prior.  Only 1,600 visitors are allowed per day and we were given an exact time of entrance.  Once inside the building we had a time limit of one hour. 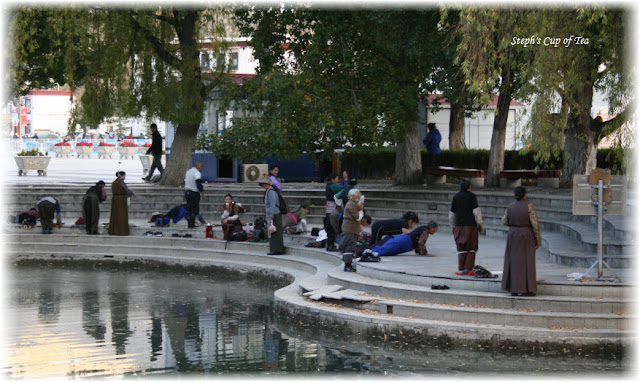 Across the street, Tibetan Buddhists perform various forms of religious practice.  These people are doing what I would call a movement meditation or prayer.  They stand, kneel, then lie prostrate on the ground, and repeat that over and over.  In a plaza nearby, others walked backwards slowly while reciting prayers or meditations.

Our world is so beautiful and rich with variety!
Posted by Steph at 8:29 AM

I've always heard tales of climbing the steps to the Potala Palace. It's so cool now to see it! Is it true that it's hard to get into Tibet?

Teafan - All tourists require a special permit to go to Tibet. Many of the guidebooks say the best way to get one is to go in with a guided tour. That's what I did. It's very highly monitored and controlled.

Fascinating! I didn't know about this palace and the stories behind it. How fortunate you were to be able to visit here.

So interesting to learn about other cultures! And I'm glad you picked up on the tea history along the way as well!

What a fascinating experience you were able to be a part of. You definitely had to be in good physical shape to climb all those steps!