Guinness with Your Tea 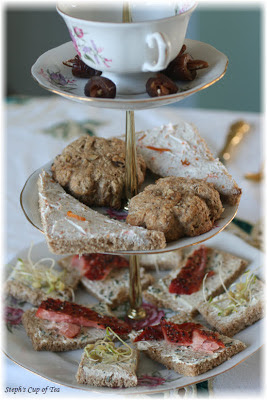 It was tea-times-two on Saturday!  A friend joined me for a tea party at my home before heading to our Japanese Tea Ceremony class, where she was the guest instructor on kimono dressing.

With a nod toward St. Pat's, I served the following.  All of these were vegan, except for the salmon and the macarons.  (I've had a nasty respiratory virus and am off dairy.)

Sandwiches:
Scones:  Guinness Soda Bread Scones These were a big hit!  To make them vegan:
Desserts:

Sounds like a great teatime, and I absolutely love how pretty your tea tray looks!

I'm inspired by your post to plan a tea get together soon!

Really pretty and even though everything is vegan it sounds delish! What is vegan cream cheese made from Steph? Thanks!

I wait until March for strawberries too. What a huge treat. I love seeing your mostly vegan tea. That can be a challenge and you did it so well.

Such a beautiful presentation --- a lovely vegan tea!

Gorgeously looking. I want to experience this taste. Moreover, it has so many healthful properties:
Healing tea.

We've long been inspired by urban art and have finally created a collection that pays homage to this secret addiction of ours!